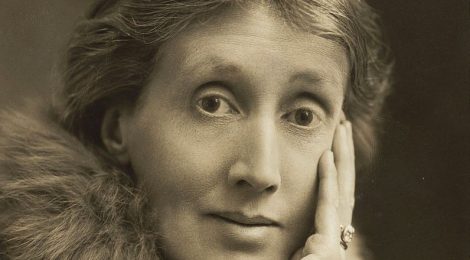 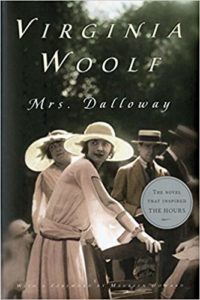 Septimius Warren Smith, aged about thirty, pale-faced, beak-nosed, wearing brown shoes and a shabby overcoat, with hazel eyes which had that look of apprehension in them which makes complete strangers apprehensive too. The world has raised its whip; where will it descend (Woolf 14).

Septimus thought, and this gradual drawing together of everything to one center before his eyes, as if some horror
had come almost to the surface and was about to burst into flames, terrified him. The world wavered and quivered and threatened to burst into flames. It is I who am blocking the way, he thought (Woolf 15).”

“And there the motor car stood, with drawn blinds, and upon them a curious pattern like a tree, Septimus thought, and this gradual drawing together of everything to one centre before his eyes, as if some horror had come almost to the surface and was about to burst into flames, terrified him. The world wavered and quivered and threatened to burst into flames. It is I who am blocking the way, he thought. Was he not being looked at and pointed at; was he not weighted there, rooted to the pavement, for a purpose? But for what purpose?” (Woolf 15)

Septimus, lately taken from life to death, the Lord who had come to renew society, who lay like a coverlet, a snow blanket smitten only by the sun, forever unwanted, suffering forever, the scapegoat, the eternal sufferer, but he did not want it, he  moaned, putting from him with a wave of his hand that eternal suffering, that eternal loneliness ( Woolf 25).

“For she could stand it no longer. Dr. Holmes might say there was nothing the matter. Far rather would see that he was dead! She cannot sit beside him when he started so and did not see her and made everything terrible; sky entry, children playing, dragging carts, blowing whistles, fallen down; all were terrible. ‘Septimus has been working too hard that was all she could say to her own mother. To love makes one solitary, she thought. She could tell nobody, not even Septimus now, and looking back, she saw him sitting in his shabby overcoat alone, on the seat, hunched up, staring. And it was cowardly for a man to say he would kill himself, but Septimus had fought; he was brave, he was not Septimus now. He was selfish. So men are. For he was not ill. Dr. Holmes said there was nothing the matter with him” (Woolf 33). Find out what this scene is saying here! 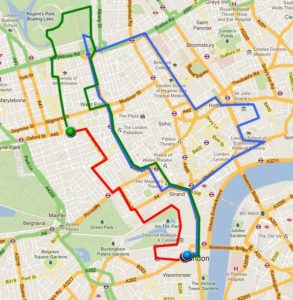 “But Lucrezia Warren Smith was saying to herself, It’s wicked; why should I suffer? she was asking, as she walked down the broad path. No; I can’t stand it any longer, she was saying, having left Septimus, who wasn’t Septimus any longer, to say hard, cruel, wicked things, to talk to himself, to talk to a dead man, on the seat over there; when the child ran full tilt into her, fell flat, and burst out crying.” (Woolf 65)

A mother and her child wearing a gas mask during the first World War.

“She frowned; she stamped her foot. She must go back again to Septimus since it was almost time for them to be going to Sir William Bradshaw. She must go back and tell him, go back to him sitting there on the green chair under the tree, talking to himself, or to that dead man Evans, whom she had only seen once for a moment in the shop. He had  seemed a nice quiet man; a great friend of Septimus’s, and he had been killed in the war.” (Woolf 66) 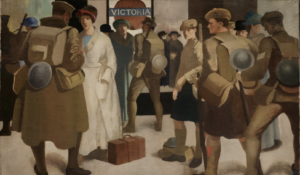 “This was the painting of Bernard Meninsky representing typical London scenes during and after the arrival of a Leave Train from the Front.”
Location: Victoria, London, England, UK.
(1917)

“He said people were talking behind the bedroom walls…He saw things too – he had seen an old woman’s head in the middle of a fern. Yet he could be happy when he chose. They went to Hampton Court on top of a bus, and they were perfectly happy. All the little red and yellow flowers were out on the grass, like floating lamps he said, and talked and chattered and laughed, making up stories. Suddenly he said, “Now we will kill ourselves”, when they were standing by the river…” (Woolf 66)

Then when they got back he could hardly walk. He lay on the sofa and made her hold his hand to prevent him from falling down, down, he cried, into the flames! and saw faces laughing at him, calling him horrible disgusting names, from the walls, and hands pointing round the screen. Yet they were quite alone. But he began to talk aloud, answering people, arguing, laughing, crying, getting very excited and making her write things down. Perfect nonsense it was; about death; about Miss Isabel Pole. She could stand it no longer. She would go back. (Woolf 66 & 67)

He dropped her hand. Their marriage was over, he thought, with agony, with relief. The rope was cut; he mounted; he was free, as it was decreed that he, Septimus, the lord of men, should be free; alone (since his wife had thrown away her wedding ring; since she had left him), he, Septimus, was alone, called forth in advance of the mass of men to hear the truth, to learn the meaning. (67)

Yet Dr. Homes said there was nothing the matter with him. What then had happened -why had he gone, then, why, when she sat by him, did he start, frown at her, move away, and point at her hand, take her hand, look at it terrified? Was it that she had taken off her wedding ring? “My hand has grown so thin,” she said ” I have put it in my purse,” she told him. He dropped her hand. Their marriage was over; he thought with agony. (Woolf 67)

One of the British First Wedding Rings.

For God’s sake don’t come! Septimus cried out. For he could not look upon the dead. But the branches parted. A man in grey was walking towards them. It was Evans! But no mud was on him; no wounds; he was not changed. I must tell the whole world, Septimus cried” (Woolf 69)

For God’s sake don’t come! Septimus cried out. For he could not look upon the dead. But the branches parted. A man in grey was walking towards them (Woolf 70).

“His wife was crying, and he felt nothing; only each time she sobbed in this profound, this silent, this hopeless way, he descended another step into the pit” (Woolf 91).

Her husband is seriously ill, Sir William said. Did he threaten to kill himself? Oh, he did, she cried. But he did not mean it, Of course not. It was merely a question of rest, said Sir. William; of rest, rest, rest; a long rest in bed. There was a delightful home down in the country where her husband would be perfectly looked after. Away from her? she asked. Unfortunately, yes; the people we care for most are not good for us when we are ill.” ( Woold 96)

To his patients he gave three-quarters of an hour; and if in this exacting science which has to do with what, after all, we know nothing about — the nervous system, the human brain — a doctor loses his sense of proportion, as a doctor he fails. Health we must have; and health is proportion; so that when a man comes into your room and says he is Christ (a common delusion), and has a message, as they mostly have, and threatens, as they often do, to kill himself, you invoke proportion; order rest in bed; rest in solitude; silence and rest; rest without friends, without books, without messages; six months’ rest; until a man who went in weighing seven stone six comes out weighing twelve (Woolf 99). “

But he would wait till the very last moment. He did not want to
die. Life was good. The sun hot. Only human beings — what did they want? Coming down the staircase opposite an old man stopped and stared at him. Holmes was at the door. “I’ll give it your” he cried, and flung himself vigorously, violent
down on to Mrs. Filmer’s area railings” (Woolf 149).

But what an extraordinary night! She felt somehow very like him- the young man who had killed himself. She felt glad that he had done it; thrown it away. ( Woolf 186)