Septimus Warrens fought in the First World war, “also known as the World War I or the Great War; originating in Europe that lasted from 28 July 1914 to 11 November 1918. The First World War took place for 4 years and it was a global war. It was described as the ‘War to End All Wars’, more than 70 million military personnel, including 60 million Europeans, were mobilized in one of the largest wars in history. Over nine million combatants and seven million civilians died as a result of the war. The war drew in all the world’s economic great powers, assembled in two opposing alliances: The Allies versus the Central Powers of Germany and Austria-Hungary. Not long after the start of the war, there was a pandemic of neurological transformation symptoms where soldiers from both sides experienced these symptoms. Some of these symptoms included dizziness, tremor, weakness, headaches, and amnesia. The soldiers fought in the war experienced a clinical condition, not familiar to the time period.” (Click on the World War 1 hyperlink and look at the second video to see a demonstration of these symptoms.) This condition was known as “shell shock.” Some of Septimus symptoms became visible and are described as “gone as he threatened to kill himself” (35). As a result, Septimus remembers his time in the warm, remembers his observation and how he witnessed people getting killed; including his friend Evans. This also pushes him to the thought of wanting to be dead along with the people beside him and his close friend, Evans. 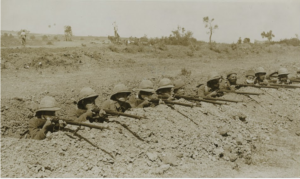 A remarkable group of paintings was commissioned by the British government towards the end of the First World War as a memorial to the dead. The committee who commissioned the series of paintings saw them as, “the greatest artistic expression of the day.” They wanted to permanently display the paintings in a bespoke memorial gallery, known as the Hall of remembrance, but this ambitious plan was never realized. The entire project ran out of time and money and the Imperial War Museum became the custodian of this collection.

← Brougham
Terrified →
Need help with the Commons? Visit our
help page Send us a message
Skip to toolbar