Shell shock was not diagnosed

Shellshock was a mental illness that was not diagnosed during this time after World War I. At this time, clinical professionals believed repression was something that was perceived to be effective in the contribution to the behaviors of the soldier after the war; thus, the doctors do not know how to treat it. As a relates to Septimus, he used repression after experiencing and observing the deaths of the people around him; including his very close friend, Evans. Septimus did not notice anything; his repression keeps all of the past observations Inside, unable to be released and expressed. “For she could stand it no longer. She cannot sit beside him when he stared so into not see her and made everything terrible; sky and tree, children, playing, dragging carts,  blowing whistles, and falling down; all were terrible” (Woolf 33). Rezia Could not stand it when her husband used his repression to keep himself from expressing the beauty of nature; what he is observing now it’s been affected and tainted by the memories of him being in the war. As state in the Repression of the War Experience, “Rivers was a pioneer in this field. Here, he writes about how the repression of traumatic war experiences only delays an individual’s recovery. Doctors were generally inexperienced in dealing with this new form of mental distress, and commonly believed that repression was effective ‘as a definite course of treatment’, as Rivers puts it.” Clinical professionals attempted to comprehend what had caused ‘shell-shock’ and how best to treat it. They perceived very early on that the distress, “grief, fear, and horror of war could cause men to break down. Some doctors said that the vibrations of shell explosions caused invisible, molecular damage to the brain. By the end of the First World War, many doctors believed that both psychological and physical injuries could be found in many cases of ‘shell-shock’.” 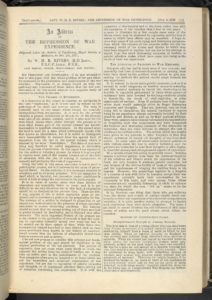 An Address on the Repression of War Experience’

← Children
Foreign →
Need help with the Commons? Visit our
help page Send us a message
Skip to toolbar