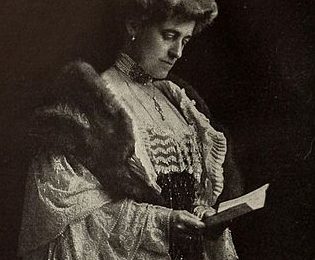 Through disengagement of a crucial situation, Wharton ponders does class play a role in both old and new New York?. Throughout the novella, Edith takes on highs and lows of Lizzie Hazeldean and her affair with Henry Prest, with the notion she might be found out through the conflagration that took place at the Fifth Avenue Hotel on New Years Day.  Such a festive day for all that lived in New York, the day of new beginnings, one is to start a new with resolutions, and forget the past and move on to the future. 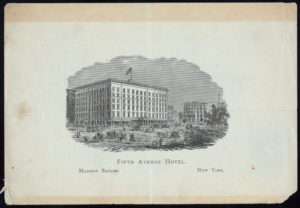 “She was bad …always.  They used to meet at the Fifth Avenue Hotel,” said my mother, as if the scene of the offense added to the guilt of the couple whose past she was revealing.  Her spectacles slanted on her knitting, she dropped the words in a hiss that might have signed the snowy baby-blanket which engaged her indefatigable fingers. (It was typical of my mother to be always employed in benevolent actions while she uttered uncharitable words.) (237)

“They used to meet at the Fifth Avenue Hotel”; how the precision of the phase characterized my old New York! A generation later, people would have said, in reporting an affair such as Lizzie Hazeldean’s with Henry Prest: “They met in hotels” -and today who but a few superannuated spinsters, still feeding on the venom secreted in their youth, would take any interest in the tracing of such topographies?” (237)

“Life had become too telegraphic for curiosity to linger on any given point in a sentimental relation; as old Sillerton Jackson, in response to my mother, grumbled through his perfect “china set”: “Fifth Avenue Hotel? They might meet in the middle of Fifth Avenue nowadays, for all that anybody cares” (238) 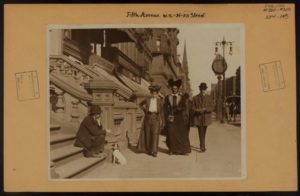 “My mother’s mother, Grandmamma Parrett, still lived in the house in West Twenty-third Street which Grandpapa had built in his pioneering youth, in days when people shuddered at he perils of living north of Union Square-days that Grandmamma and my parents looked back to with a joking incredulity as the years passed and the new houses advanced steadily Park-ward, outstripping the Thirtieth Streets, taking the Reservoir at a bound, and leaving us in what, in my school-days, was already a dullish back-water between Aristocracy to the south and Money to the north” (238)

“Even then fashion moved quickly in New York, and my infantile memory barely reached back to the time when Grandmamma, in lace lappets and creaking “moire,” used to receive on New Year’s Day, supported by her handsome married daughters.  As for old Sillerton Jackson, who, once a social custom had dropped into disuse, always affected never to have observed it, he stoutly maintained that the New Year’s Day ceremonial had been taken seriously except among families of Dutch descent, and that that was why Mrs. Henry van der Luyden had clung to it, in a reluctant half-apologetic way, long after her friends had closed their doors on the first of January, and the date had been chosen for those out-of-town parties which are so often used as a pretext for absence when the unfashionable are celebrating their rites.” (239)

“The hotel, for all its sober state, was no longer fashionable. No one, in my memory, had ever known anyone who went there; it was frequented by “politicians” and “Westerners,” two classes of citizens whom my mother’s intonation always seemed to deprive of their vote by ranking them with illiterates and criminals.” (240) 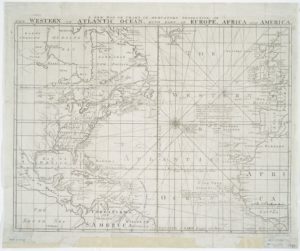 “Lizzie Hazeldean? Running out of the Fifth Avenue Hotel on New Year’s Day with all those dressed-up women? But what on earth could she have been doing there? No; nonsense! It was impossible . . . There’s Henry Prest with her,” continued Aunt Sabina in a precipitate whisper. “With her?” someone gasped … the men of the family said nothing, but I saw Hubert Wesson’s face crimson with surprise.”  (243)

“Well it’s over: here are the firemen coming out again,” someone said at length. “We youngsters were all alert at that; yet I felt that the grown-ups lent but a half-heart attention to the splendid sight which was New York’s only pageant: the piling of scarlet ladders on scarlet carts, the leaping up on the engine of the helmeted flame-fighters, and the disciplined plunge forward of each pair of broad-chested black steeds, as one after another the chariots of fire rattled off.” (245) 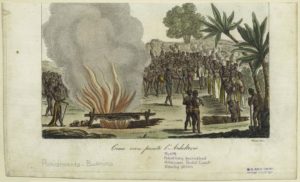 “MRS. HAZELDEAN paused at the corner of Fifth Avenue and Madison Square.  The crowd attracted by the fire still enveloped her; it was safe to halt and take breath.” (247)

“Her companion, she knew, had gone in the opposite direction.  Their movements, on such occasions, were as well-ordered and as promptly executed as those of the New York Fire Brigade; and after their precipitate descent to the hall, the discovery that the police had barred their usual exit, and the quick: “You’re all right?” to which her imperceptible nod had responded, she was sure he had turned down Twenty-third Street toward Sixth Avenue” (247)

“Mistress and maid exchanged a glance of sympathy, and Susan felt herself emboldened to suggest: “Perhaps the outgoing will do him good,” with the tendency of her class to encourage favoured invalids in disobedience. Mrs.Hazeldean’s look grew severe. ‘Susan! I’ve often warned you against talking to him in that way—’” (250) 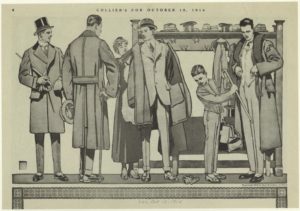 “Her mistress made an impatient movement. “Oh well, I daresay he won’t be long. The fire’s over.” “Ah-you knew of it too, then, ma’am?” “Of the fire? Why, of course, I saw it, even-” Mrs. Hazeldean smiled. “I was walking home from Washington Square-from Miss Cecilia Winter’s-and at the corner of Twenty-third Street there was a huge crowd, and clouds of smoke… It’s very odd that I wouldn’t have run across Mr. Hazeldean.” She looked limpidly at the parlourmaid. ‘But, then, of course, in all that crowd and confusion…'” (251)

“Then she pushed the flowers aside, and after rearranging her dark hair before the mirror, carefully dressed herself in a loose garment of velvet and lace which lay awaiting her on the sofa, besides her high-heeled slippers and stockings of open-work silk. She had been one of the first women in New York to have tea every afternoon at five, and to put off her walking-dress for a tea-gown” (252) 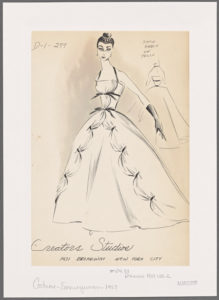 The Miriam and Ira D. Wallach Division of Art, Prints and Photographs: Picture Collection, The New York Public Library. “White halter top evening dress with wide, full-length skirt featuring a top layer of fabric tied back with ribbons in the front into scalloped rows; bodice decorated with a similar use of ribbons. ” The New York Public Library Digital Collections. 1957. http://digitalcollections.nypl.org/items/aed7bc50-aaf8-0132-52f5-58d385a7bbd0

“‘He released her, and moved toward the fire, and she stood motionless, staring blindly ahead, while the thoughts spun through her mind like a mill-race. Sillerton Jackson–‘  she echoed, without in the least knowing what she said. ‘Yes; he has the gout again–luckily for me!–and his sister’s brougham came to the Parretts’ to fetch him.” She collected herself. “You’re coughing more than you did yesterday,” she accused him. “Oh, well–the air’s sharpish. But I shall be all right presently … Oh, those roses!” He paused in admiration before his writing-table.” (254.)

“She felt a rush of tears: no, there were times when fate was too cruel, the future too horrible to contemplate, and the past- the past, oh much worse! And there he sat, coughing, coughing- and thinking God knows what, behind those quiet half-closed lids. At such times he grew so mysteriously remote that she felt lonelier than when he was not in the room.” (256)

“The maid came in to draw the curtains and light the lamps. The fire glowed, the scent of the roses drifted on the warm air, and the clock ticked out the minutes, and softly struck, as she so often had before: “Now, what would be the natural things for me to say?” (258) 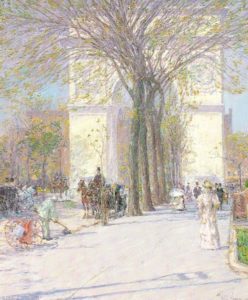 “Soon after her husband’s death, one of her cousins, the Miss Cecilia Winter of Washington Square to whom my mother had referred, had died also, and left Mrs. Hazeldean a handsome legacy.  And a year or two later Charles Hazeldean’s small estate had undergone the favourable change that befell New York realty in the ‘eighties. The property he had bequeathed to his wife had doubled, then tripled, in value; and she found herself, after a few years of widowhood, in possession of an income large enough to supply her with all the luxuries which her husband had struggled so hard to provide” (310)