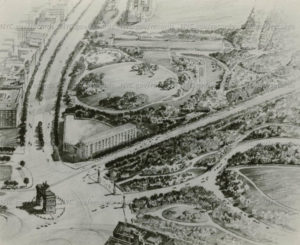 After Lizzie’s awful sin of adultery, she returns home to her maid who tells Lizzie that her husband Charles was not home.  This took Lizzie by surprise as it was extremely cold, he was ill and shouldn’t be outside, besides that Lizzie was nervous about being found out by Charles.  The maid informs Lizzie that Charles was at the fire that occurred at the Fifth Avenue Hotel and should be home shortly. Lizzie quickly came up with the natural thing to do, that was to inform the maid that she too was at the fire.  Judith Saunders states, “As the point of view shifts to Lizzie herself, all her actions and feelings seem to accord with the adulterous deception of which she stands accused: her terror that she may have been observed with her lover, her careful lies to her maid concerning her whereabouts, her anxiety lest gossip reach her husband’s ear (121.)” It seems that Lizzie was trying out her story with the maid before Charles arrived back home. Although Lizzie tries out her lie with the maid she fails to see what the walk home represents, which was the walk of shame.

The walk of shame is too often the result of a woman walking home after having sex, knowing what occurred was wrong for whatever reason. Women of Lizzie’s status may not have felt by walking home she committed a shameful act, as she was providing for her family. According to Wikipedia, “the walk of shame refers to a situation in which a person must walk past strangers or peers alone for an embarrassing reason before reaching a place of safety and privacy.” The definition of “walk of shame” according to the novella describes Lizzie’s walk home from the hotel to her humble abode with Charles. Lizzie tells us of her walk home from Miss Winter’s house, however, fails to mention of course her being inside the hotel performing a sexual deed with Henry to take care of her family. Walk of shame has been in existing dating back, Wikipedia states, “it often occurs the morning after a night out at a bar, nightclub, or party.” People see the walk of shame as an overnight stay with a sexual partner at their residence and sometimes is referenced as a one night stand. In Lizzie’s case it wasn’t an overnight stay nor was it a one night stand, however, she did commit a shameful act with Henry to secure her fortune she was accustomed too. It was also shameful because Lizzie was seen with a disheveled appearance and unsuitable attire compared to the patrons of the hotel. If Lizzie’s walk home wasn’t shameful then why did she make sure to pull down her veil and why did the Wesson’s keep it a secret from Charles, because Lizzie did not want to be seen and the class status of Charles. If Charles was from new money, Lizzie’s affair would have been the talk of the town, however, Charles was from old money and was ill. The Wesson’s did not keep the affair just because Charles was from old money but because he was sick and although they may not agree with Lizzie’s actions, they understood them.

← corner of Fifth Avenue and Madison Square
Mother →
Need help with the Commons? Visit our
help page Send us a message
Skip to toolbar