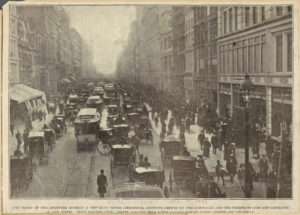 Irma and Paul Milstein Division of United States History, Local History and Genealogy, The New York Public Library. “Theheart of the shopping district a few days before Christmas, showing crowds on the sidewalks and the throng of cabs and carriages in the street, West Twenty-third Street looking from Sixth Avenue toward Fifth Avenue and Broadway” The New York Public Library Digital Collections. 1903-12-19. http://digitalcollections.nypl.org/items/6567fbc0-e902-0131-a989-58d385a7bbd0

Lizzie and her partner in crime Henry Prest parted ways after the fire. Henry went uptown, while Lizzie went downtown, this is a true separation of wealth and class. Lizzie was from old money and Henry was from new, their participation of committing adultery shows the debate of whether to tell of the affair or not, Jacobsen states “Wharton’s participation in and response to America’s anxious debate over wealth and class during the rapidly changing economic landscape of the early twentieth century (101.)” If Lizzie husband Charles was not ill, the results of Lizzie having an affair would be the talk of the town.  Also, if Charles was not ill, Lizzie would not have to have an affair as Charles would have been able to supply Lizzie with all of her needs as he did in the past, before his illness.

Lizzie and Henry had their reasons for the affair, for Lizzie it was to provide for her family the only way she knew how Lizzie did not have any skills of a working woman.  For Henry, it was as if he was in love with Lizzie, although Henry was the most eligible bachelor of the town the only woman the novella spoke of Henry being with was Lizzie.  Henry at least waited until the death of Charles before he made advancement towards Lizzie in Mrs. Mant house.  The same house Lizzie had so many memories in, she met Charles, got engaged to Charles and in the house, she became a woman.

It’s funny how the book takes you on a rollercoaster, up and down, side to side, to end at the same point Lizzie started from. Taking Lizzie through the hoops of having to live with Mrs. Mant, marrying Charles, being a prostitute, and then to fin for herself after the death of Charles.  Lizzie decides to not take Henry’s offer of being with him but instead to be a woman that stands on her own. Luckily for Lizzie, she inherits money from her cousin Miss Winter and the property Charles left Lizzie grew in wealth after the rise of real estate. Lizzie shows us that she does not need a man anymore to fulfill her needs after the death of her true love, Charles. Although lonely Lizzie tries to keep herself busy by going to the opera house and having parties at her house to fill the void she might have. At the end of the novella, Lizzie dies, but before her death, that twelve-year-old boy that admired Lizzie so much happens to be at her bedside, how ironic. Ironic because he was from the family that Lizzie assumes that would tell Charles of her affair with Henry, however, he was the only one that came to her side at the end.

← The Strength of a Million People
Gully →
Need help with the Commons? Visit our
help page Send us a message
Skip to toolbar