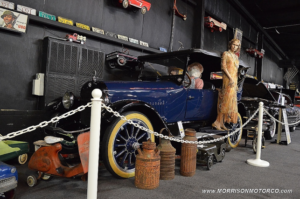 1922 Studebaker Touring that the same family since the late 1960s owned. Outstanding Frame off Restoration. Has Real Leather and Brand new tires

Motor cars were invented in the late 1800s but it was between the 19th and 20th century that motor cars became popular; specifically around the 1920s. The benefits of motor cars are mobility, convenience,being independent, having transportation right when you want it, and being able to travel wherever you please. “Regarded as first as a luxury, the motor car is recognized in China as a a necessity for rapid transit in cities, for suburban and interurban communications, for connecting railways with waterways, for feeder lines to railways and water routes, etc.”(35) China was one of the first countries to take advantage or motor cars. As for the first motor car that was ever made, originated in Mannhelm, Germany in 1885. The inventor is Karl Frederick Benz who invented a motor vehicle on three wheels powered by gasoline. Over time these motor vehicles improved by interior and exterior. By time the novel Mrs. Dalloway was published in 1925, motor cars greatly improved which a square looking figure now on four wheels and proving more shelter to the driver and passengers This passage related to the novel Mrs. Dalloway by Virgina Woolf because Septimus thought some horror had almost come to the surface and was about to burst into flames. He was very much Paranoid.  Septimus is terrified when he sees the car with a someone inside, he thinks the car stopped because of him and that everyone is looking at him rather than the person in the car; his paranoid delusions make him feel fault for everything going on.

← dropped hand
September 15,1963 →
Need help with the Commons? Visit our
help page Send us a message
Skip to toolbar