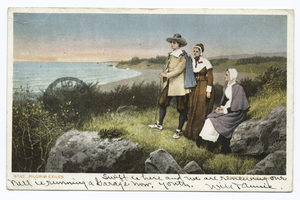 As stated in the Cambridge English Dictionary a pilgrim was “a member of the group of English people who sailed to America and began living in Plymouth, Massachusetts, in 1620.” The Pilgrims were a group of one hundred individuals that settled in the New World. They wanted religious freedom. They had a ship named the Mayflower and settled in present day Massachusetts. Moreover, in December 1620 they decided to anchor in Plymouth. Plymouth would eventually become part of New England. The pilgrims would befriend the Native Americans. Forging this relationship with them will mark the inception of the Thanksgiving holiday tradition in the United States of America.

← September 15,1963
Torah Wisdom →
Need help with the Commons? Visit our
help page Send us a message
Skip to toolbar