Quotation: “That burning day when I got ready to leave New York and start out of my journey to college!  I felt like Columbus starting out for the other end of the earth. I felt like a pilgrim fathers who had left their homeland and all their kin behind them and trailed out in search of  the New World” (209). 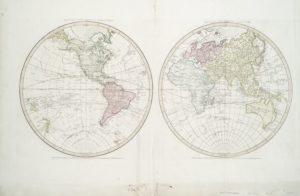 Post: The concept of the New World ideology plays a prominent role in Yezierska’s novel Bread Givers.  Sara Smolinsky constantly find herself in battle fighting the “Old World” social norms while trying to adapt to the the practices of the “New World”.  According to the Oxford English Dictionary the New World “is a continent or country discovered or colonized at a comparatively late period; especially the Western Hemisphere or the region of North, Central, and South America.”  In other words, the New World consisted of any region of North, Central, and South America.  The term was originally coined and popularized by Christopher Columbus and other Europeans.  Columbus set sail on August 3, 1492 with his three ships to begin his expedition.  They were named the Nina, Pinta, and Santa Maria.  He landed in the “New World” on October 12, 1492.

← Powder
Giddy →
Need help with the Commons? Visit our
help page Send us a message
Skip to toolbar