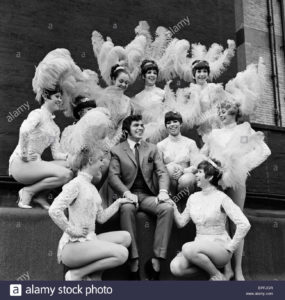 Lucky Engelbert Humperdinck – for not only has he just spent four months at the London Palladium with nine gorgeous chorus girls, but the girls have now been signed to join him for another four months in his summer show at Blackpool A.B.C. www.alamy.com

In the novel “Voyage in the Dark”, Anna Morgan moved to London from the Caribbean after her father’s death. She was unhappy with the idea of her stepmother Hester and moving to London. Anna described London as a cold and grey looking place and was not looking forward to living in London. After time passed Anna described herself as a chorus girl or a “performer”, it was her profession. Anna trying to stabilize herself on her own, she encounters with a landlady that judged her appearance right away. In London, women were judged by their appearance or the clothes they wore. Anna was denied a room by the landlady due to her appearance and her profession, meanwhile, Maudie decided to speak.

In “Voyage in the Dark”, Anna Morgan was described to be a “chorus girl” or a “performer”, a professional that lived in London in 1914. According to article, “Staging the Self: Gender, Difference, And Performance in Jean Rhys’s Voyage in the Dark” it states that “Rhy’s text can be seen as an act, a performance that is effected with the strategic aim of maintaining gender within its binary frame.” explaining Anna’s life and her reason of doing what she does. Anna did anything to support herself, she encountered with many men to feel welcomed. Anna’s influence of being felt welcomed or if she belonged in London was her companionships with men, it was an escape for her. It’s an interaction that is viewed as a performance shaped by an environment and audience, it was constructed to provide good impressions from others. Anna is feeling estrange and disempowerment as a woman, which we see throughout the book, or in other words, “as time passes, her performance lacking lustre as she becomes visibly inanimate and dispirited”. (149) First Anna started off being sad and was not feeling that she belonged in London, she described it be ugly and grey. Later went through disappointments, she was judged by her appearance, and felt abandonment. At the end we were left with a doubt of her being alive or if she died after her abortion. Anna’s influence to be felt welcomed in London was her interaction with men, an escape from reality. It was all about dreams and suggested ideas that Anna thought or believed to help cope her acceptance of living in London. Anna came to London after living in the Caribbean, she was forced to leave her comfort zone. Rhys’s novel was seen to be a great performance of a young girl trying to survive in London on her own and ends up in a tragic situation.

← Cosmetic Powder
dressing-room →
Need help with the Commons? Visit our
help page Send us a message
Skip to toolbar