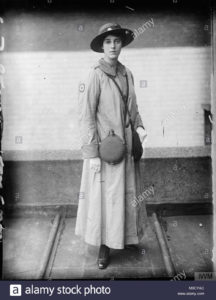 The Employment of Women in Britain, 1914-1918 A female member of the London Ambulance Column of the City of London Red Cross. www.alamy.com (Women wearing gloves)

Anna’s friend Laurie helped her feel more accepted into society by teaching Anna to have more manners or a better dress code. Laurie believed that Anna needed a touch to look like she belonged in London. Anna didn’t use to wearing gloves since in the Caribbean she never did. Wearing gloves represented your social class and your “white purity” in London. Wearing white gloves represented the “traditional emblems of respectability” and describing a person’s identity. (18) According to the novel, Anna was in search of her identity within the novel and her acceptance of living in London.  Anna wearing gloves gave her an opportunity of being well-cad and was describe that the person has an idea of what fashion and style is. Besides her wearing gloves she had to know how to sit, stand, and do hand gestures too. Anna didn’t use to this since in the Caribbean’s she never did or never thought about since she was judged on her appearance in London. Anna didn’t like being white and preferred to be black since she didn’t like the norms of what white women did or what society thought about women. Since in London 1914, women wearing white gloves was described to be a norm and represent their class. Women in London are seen to have a dress code that represented identity or status. Laurie was seen as a teacher for Anna, an influence for her to feel more adapted into society in London and feel accepted.

← dressing-room
etiquette →
Need help with the Commons? Visit our
help page Send us a message
Skip to toolbar